What are the Sounds of Water Leaks?
Water leaks in underground, pressurized pipes may make many different sounds:
●“Hiss” or “Whoosh” from pipe vibration and orifice pressure reduction
●“Splashing” or “Babbling Brook” sounds from water flowing around the pipe
●  Rapid “beating/thumping” sounds from water spray striking the wall of the soil cavity
●  Small “clinking” sounds of stones and pebbles bouncing off the pipe
The “Hiss” or “Whoosh” sound, which often sounds like constant static noise, is the only one which is always present for leaks in pipes with 30 psi or higher water pressure. The other sounds may or may not be present, and usually they are not as loud. So, we decide “Is there a leak?” by listening for the “Hiss” or “Whoosh.”

What Factors Affect These Sounds?
There are several factors that affect the loudness and the frequency range of the sounds made by water leaks transmitted on the pipes and transmitted to the surface of the ground:
●  Water pressure in the pipe
●  Pipe material and pipe diameter
●  Soil type and soil compaction
●  Depth of soil over the pipe
●  Surface cover: grass, loose soil, asphalt, concrete slab, etc.
The loudness or intensity of the leak sound is directly proportional to the water pressure inside the pipe (up to a limit): 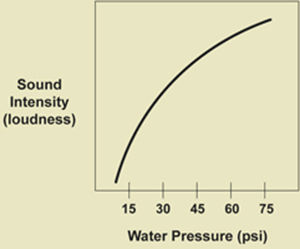 Sound Intensity (loudness) vs. Water Pressure
Metal pipes, such as iron mains, copper services, and steel pipes, transmit water leak sounds that are louder and higher frequency than do PVC pipes or asbestos-cement pipes. Thus, knowledge of the pipe material is important.
Large diameter pipes, whether they are PVC, concrete, steel, or iron, transmit much less sound from water leaks than small diameter pipes. And, large diameter pipes transmit lower frequency sounds than small diameter pipes.
Sandy soil and very loose soils, particularly over a freshly buried pipe line, do not transmit the sounds of water leaks very well, nor do water saturated soils such as bogs and swamps. Hard, compacted soil transmits the sounds of water leaks best. Soil absorbs the sounds of water leaks very quickly. Leaks in water lines that are only 3 or 4 feet deep are much easier to hear at the ground’s surface than leaks in deeper lines. At 7 or 8 feet deep, only very large leaks with good water pressure will produce enough noise to be heard at the surface.
Finally, the ground cover, whether it is an asphalt street, loose dirt, concrete slab, or grass lawn, also makes an important difference. Hard street surfaces and concrete slabs resonate with the sounds of the water leak, and the leak may be heard for 5 to 10 feet or more on either side of the water pipe. Grass lawns and loose dirt surfaces do not offer such a resonating plate-like surface, and their surface variations make firm contact more difficult.
back to top of page

How Do Leak Sounds Travel on Pipes?
Metal pipes, particularly iron mains between 6 inches and 12 inches, copper services, and steel pipes transmit the sounds of water leaks for hundreds of feet in every direction. Asbestos-cement pipe and PVC pipe do not transmit the sounds nearly as far.
Distances transmitted for the “Hiss” or “Whoosh” sounds of water leaks are a function of the pipe diameter as well as the pipe material: 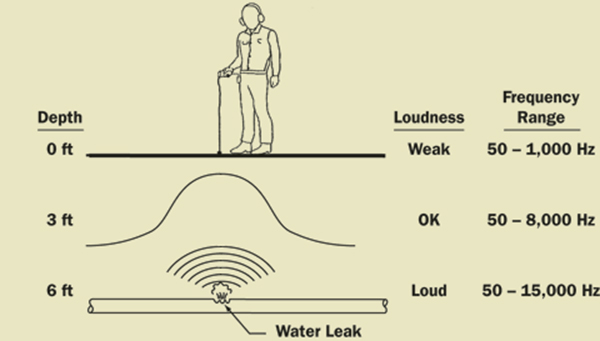 “Surveying” is the term applied to listening for water leaks when there is no obvious evidence, like water flowing on the street. Every hydrant, valve, and service line is a possible location to hear the sounds of water leaks: 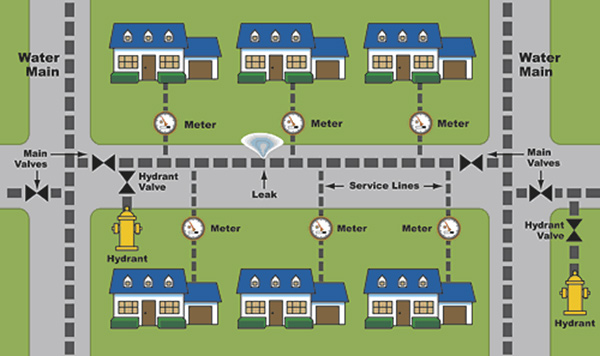 Since the sounds travel on the pipe walls better than through the soil, always listen at the hydrants, valves, and meters first. As you get closer to the leak, the sound gets louder. Finally, decide which two of these locations are the loudest. Now you are ready for “Water Leak Pinpointing.”