Thermal imaging cameras are devices that translate thermal energy (heat) into visible light in order to analyze a particular object or scene. The image produced is known as a thermogram and is analyzed through a process called thermography. Thermal imaging cameras are sophisticated devices that process the captured image and display it on a screen. These images can be used for immediate diagnosis or processed through specialized software for further evaluation, accuracy and report output. Thermal imaging cameras take measuring temperature to the next level; instead of getting a number for the temperature you get a picture showing the temperature differences of a surface.

What Do Thermal Imaging Cameras See?
Visible light is what we see around us every day. It is the only part of the electromagnetic spectrum that we can see. Visible light only takes up a small area in the electromagnetic spectrum and infrared radiation (IR) represents a larger percentage. If we want to see what’s going on in other parts of the spectrum we need specialized equipment.
All objects absorb, reflect and sometimes transmit energy at different levels. Different materials will give off heat or cold energy at different rates. It’s this energy that can be detected by infrared equipment and displayed as images.

Thermal Imaging Camera Applications and Uses
Originally developed for military use during the Korean War, thermal imaging cameras have migrated into other fields and have found many uses. Firefighters use them to see through smoke, find people and localize hotspots of fires. Law enforcement uses the technology to manage surveillance activities, locate and apprehend suspects, investigate crime scenes and conduct search and rescue operations. Power line maintenance technicians locate overheating joints and parts to eliminate potential failures. Where thermal insulation becomes faulty, building construction technicians can see heat leaks to improve the efficiencies of cooling or heating. Physiological activities, such as fever, in human beings and other warm-blooded animals can also be monitored with thermographic imaging. They are also common tools used by home inspectors.

Thermal Imaging Camera Features
Thermal imaging cameras can be purchased with the bare minimum of features that only read the temperature of the fixed center crosshairs on the display or with multiple features that allow the user to select multiple moveable crosshairs and draw comparisons between them to show the high, low and average temperatures on the display. Thermal imaging cameras have user-selectable multiple color palettes, such as black/white, iron or rainbow. The iron palette is most commonly used by home inspectors. The black/white palette helps identify details on an image, and the rainbow palette has the best thermal sensitivity for displaying the differences in temperature. See sample images below of some color palettes. 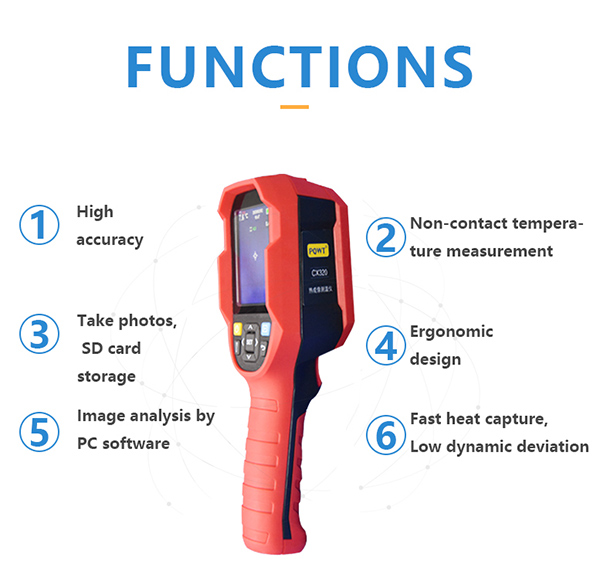